Irma came ashore on September 10th, 2017 for her second time in Florida at Marco Island. She was a Category 3 by that time, but we were expecting a much stronger hit...we were so blessed to not get that Category 5 that she was just the day before. Cheerful Heart Academy is located in an area of Naples known as Golden Gate Estates, which is 30 miles north and ever so slightly east of Marco Island.

Many of you have asked how we fared. Since our wood frame home was being built when Hurricane Andrew came through, it is not up to the Miami - Dade codes; we felt it wise to evacuate and were extremely blessed to have friends who welcomed us into their concrete block, newer built home just 5 minutes away. Another family from in town was evacuated at the last minute and joined us. Little did they know how long they would have to put up with us!

We ended up "weathering the storm" for eight hours in the bathroom and hallway of their house - six parents, two adult children, four teenagers, two medium sized dogs, and two guinea pigs - no power, no tv, no running water. The eye wall was over us for much of that time, we never got the relief of the middle of the eye. It was a frightening experience to say the least, but it was a blessing to be surrounded by loved ones and friends and to know that we would do anything for each other - including sit in a hallway and sweat!

When the storm subsided, we came out of hiding to find so much destruction around us, but the house we were in was intact. Our house was intact as well and so was the third family's house that stayed with us. All of us have roof damage and trees down. Some of us have other damages - our family from in town had a mobile home park behind her neighborhood and it was destroyed; pieces and parts in her front and back yard - all over her neighborhood. They had some water issues, and sewage issues. Our host family's house has water damage inside the walls from the roof damage; and unfortunately, it looks like the flooring may have to be replaced too since the water (and now mold) has made its way there. They lost fencing and a shed as well; and their truck engine is going to need to be replaced due to flood waters. Our family has a hole in the roof (patched and waiting on a new roof), lost two sheds, the carport is in need of shoring up, and many trees were down or needed to be cut down.

We all are finding small things that need to be done or fixed or picked up every day; I suspect that we will for a while yet. We were without power for 9 days, without cable/internet/phone for 13 days, and our cell service is still spotty in areas. Our three families are very blessed - we had food to eat, a place to sleep, people we knew living with us, plenty of board games, a generator to run the fans and the refrigerator/freezer, etc. And, we have a home left to come home to. So many of the people in our area don't...and it's hard to reconcile that fact. A picture ingrained in my memory is one of a mobile home - what was left of it - in a park close to Marco Island. The home is completely demolished except for one wall - and on that wall is a heart wreath. I don't know how that wreath wasn't blown away with everything else, but it was almost like a symbol of hope.

I will never forget walking into Target two days after the storm and the stench from the rotten food just overwhelming me - they had cleaned it all out, but they were running on generators and couldn't run the air, the coolers, or even many of the lights - we shopped by flashlight. We were there to buy underwear, socks, shorts, and tshirts for the men; we couldn't do laundry. The next day we went to Walmart for something and they had lights -but it was so eerie to see all of those produce shelves empty, and all of the refrigerated and freezer cases empty. And we were so glad that our generator was keep our food cold!!

The gas lines were long. We heard a report of one line being 7 miles long (we had no tv, no cell, no internet remember, so we listened to the radio for any news). We sat in one line for an hour and a half before being told that the gas was empty - go home. We got into line at the same place the next day - we just happened to get there right after they opened it up - and got the tank filled up. My friend was talking to the officer who was keeping the peace there and he said that someone had hit someone else in the head with a lead pipe there yesterday; while they were talking, there was a shooting at the Circle K down the street. Some people were at their worst; but we saw so many more that were at their best.

Neighbors got together to help each other get the trees out of driveways and to the end of the road. People gave water to the linemen working on the power, cell towers, and cable/internet/phone lines. People shared their resources when they could. Irma caused a lot of destruction and frustration, but she also cause a lot of people to see just how good many of the people around them are.

I'll leave you with a picture of destruction - and hope. Remember to count your blessings - you have far more than you'll probably ever know about!! ~Lynda 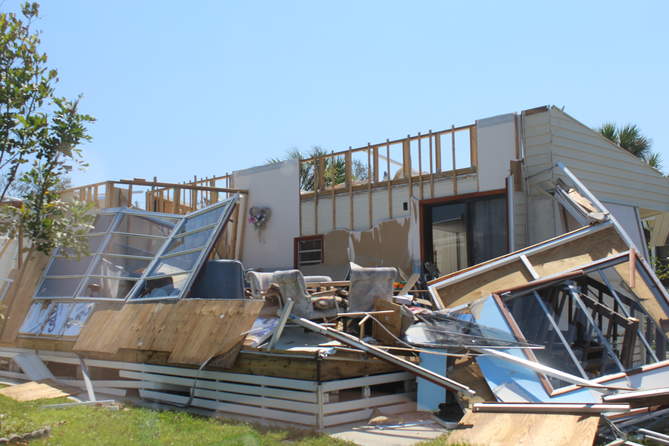